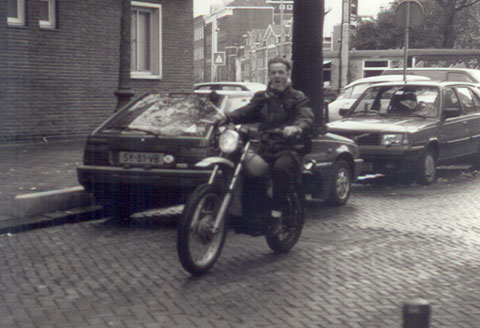 I started of on a classic bike, which I could loan of a friend of my sister.
In hindsight it started pretty good. At that time I was more into the flashy kind of motorbikes, little did I know.
I got my license so I could rent a bike once or twice during holidays but that changed pretty quick. I rode it during wintertime, had the occasionally off's on icy bridges. 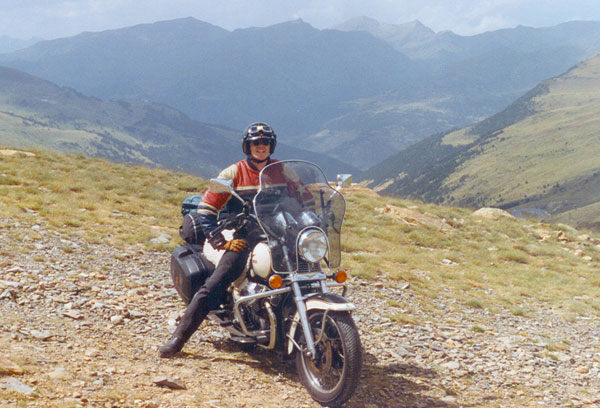 After some time being fashionable I wanted something with more character. Also size-wise this bike was a better match. I loved the fact you could ride forever into nowhere. Made some nice trips to England, Spain, Denmark, Czechoslovakia (in communist time and forgot my passport... and still I got in/out).
This was also my first bike I got on a dyno... it produced a whopping 50hp, not bad for a FI 1100cc twin cylinder ;)
When I got the bike a month, and rode about 6000km through places like Austria, it threw me off when riding in a straight line, doing 150km/h on the highway. It got into a speed-wobble and violently threw me off... hardly any damage to me (in jeans mind you) , the bike was nearly totalled.
I got a new one but I never was totally at ease when riding 5000rpm's ... the trust was gone.
I was also obsessed with another riding style... I wanted pegs, no footboards... bended knees instead of stretched legs, a more active riding position on the bike.
I test-rode a Moto Guzzi 1100 Daytona, a brand new drop dead gorgiuos bike at that time, but also on that bike I was not at ease when reaching the rpms that had bad associations, the same vibrations and guzziness...  so no more Guzzi's for me.
My Guzzi dealer was also a Triumph dealer, so I also took a test ride on a ....

... and I was sold.
So stable... doing 200 without a scare in my body... that was a big relieve after the Guzzi.
This bike felt really good but it required a very different riding style.
I was going through the rear brake-pads in no time... a result of the Guzzi combined rear-front brake, I used the footbrake a lot. That became less very soon.
Being online at that time and showing of my Triumph on a website, I met a few guys from Amsterdam who would be later known as DemolitionMan and KTMax. Monomaniacs to be but riding Triumph at that time.
I had already got rid of my chicken lines on a circuit but they lifted my riding style to a new level. Following them, thinking that if their Triumph can go so fast through corners mine could too, I was soon scrapping pegs, sliders and even the exhaust over the tarmac.
So it was pimping time....
The front forks got adjusted by Technoflex and the rear shock replaced by a fully adjustable Technoflex rear shock. It lifted the bike a lot so no more fear of touching the ground with solid bike parts.
The exhaust was replaced with a BOS 3-1 system... great roar and saved many MANY kilo's!
The airbox was removed and replaced with 3 K&N airfilters.
Front brakediscs where made floating, brakelines replaced with steal ones.
Wheels replaced by Dymag Magnesium wheels. Looked great, saved a lot of weight but it also needed al lot of adjusting to... maybe it was too much.
I also transformed the front making it look a bit likt the 'new' T509 Speed Triple. I had stripped the fairing before because I really liked the naked look. And finished it off with a new colour. 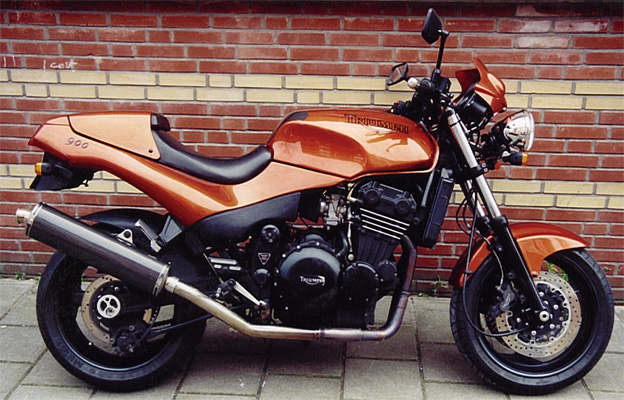